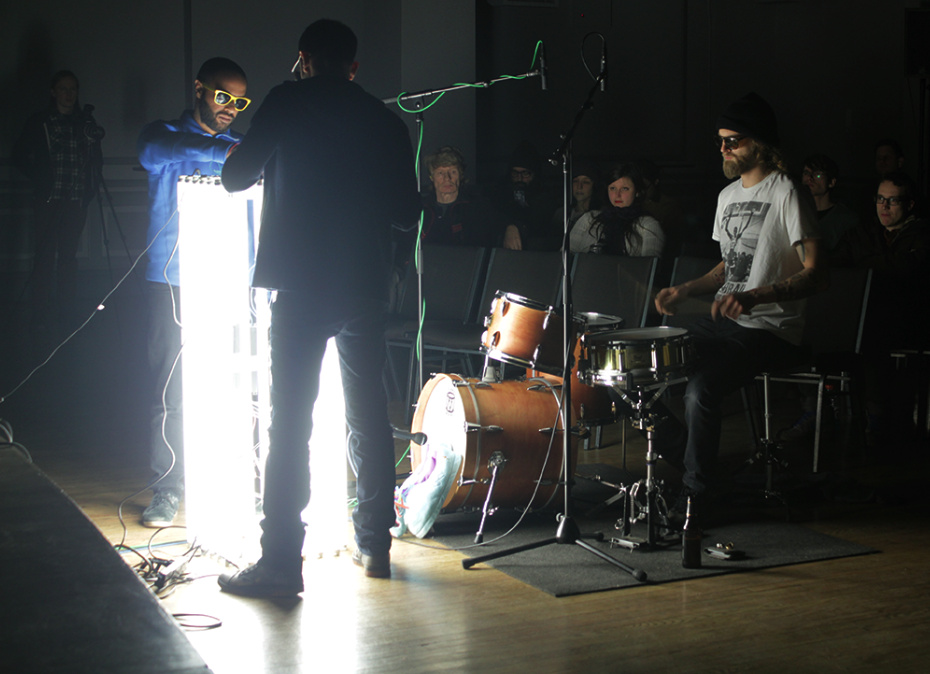 Loud Objects performing with Greg Fox
“When the strings are vibrating,” suggests Laraaji, “your body gets in tune with it.” With these words, the storied new age musician and former Brian Eno collaborator inadvertently offered a credo for the entirety of Mixology, an annual experimental music expo at Roulette in Downtown Brooklyn. But their programs that involved them proved the most telling. Laraaji is referring to a moment during “Fun with Sound and Laughter”–an early afternoon workshop for kids age two through eight–when he went around the stage placing his zither on top of children whom he asked to lay flat on the floor. He would brush the strings with his fingers, and you could see their faces electrify as they felt the vibrations of the instrument. This was the dynamic between performers and the audience for the duration of this year's iteration of Roulette's future music symposium.
You may have noticed one father at Laraaji's class wearing a Yeezus t-shirt under a cardigan. This would be Matthew Mehlan, the festival's curator this year. Amanda Davis, worth noting, organized Laraaji's class. Under Mehlan's direction, the festival broke out of its typical mode as a showcase for laptop music. He chose to present what he terms “post-PC music” by “going back to some technologies that don't require a computer, or accentuating the computer as instrument.” If you have ever gone to see someone perform solely with a laptop, you are aware of how opaque the live music experience is. You have no idea what's happening on that little screen that the musician is staring at the whole time, and the abstract sounds created can often be the final straw that alienates the listener from the music completely. Mixology this time around was an antidote to this syndrome. 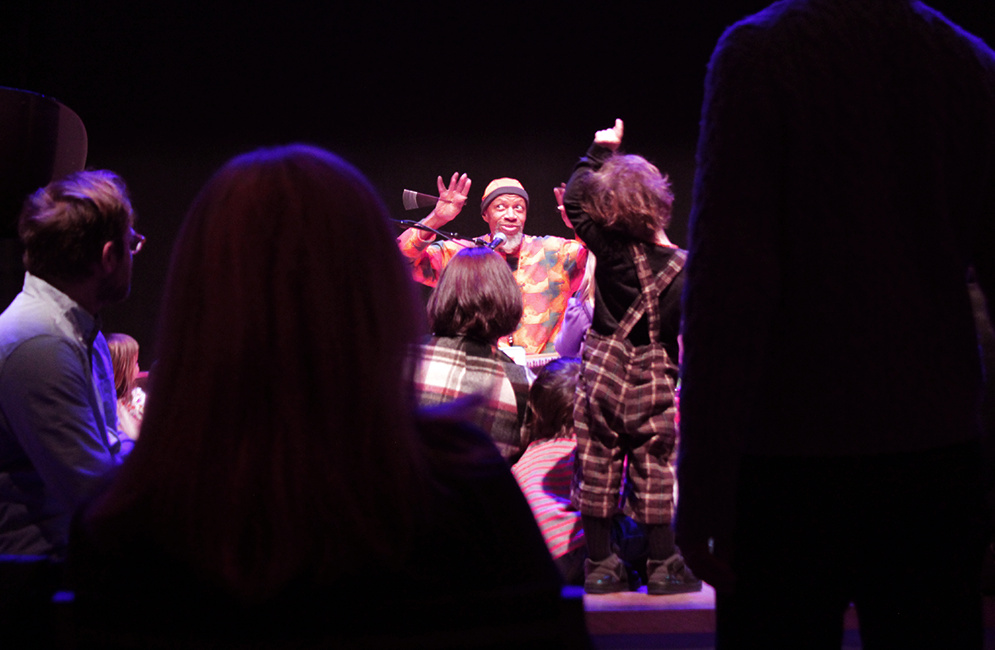 Laraaji leading rendition of "This Little Light of Mine"
Consider the performance by Loud Objects. As artists Tristan Perich and Kunal Gupta assumed their positions alongside drummer Greg Fox, the lights in the venue went out. The audience was literally in the dark, and perhaps even anxious that power was lost during an event that is very much so dependent on electricity. Suddenly, a square structure composed of vertical fluorescent light tubes turned on, filling the space with light. It also produced a droning noise, hence a “loud object.” The three musicians put on Ray Bans, each a different color, during which point Gupta's upper lip shot into a grin. What ensued was a performance during which Greg Fox shredded on the drums, as he is wont to do, while Perich and Gupta soldered and manipulated wires on the fluorescent lights to change the timbre of the sound.
With their set's concept so easy to latch on to, by allowing the audience to watch the mechanical process of their sound, Loud Objects helped Mehlan achieve his goal of making sure that “we're not just fans, we're not just the masses.” This is exactly why Mehlan brought in Laraaji, as well as Ezra Buchla and Peter Blasser to present their cutting edge music technologies to the festival audience which Mehlan reckons made up of “75% electronic musicians.” Blasser's presentation notably culminated in him playing his own video game about synthesizer-smog (it's complex, don't worry about it), while both her and his toddler son were shirtless on stage.
Loud Objects was among the majority of musicians at the festival following the implicit directive to make alien music human, to take the abstract and lend it concrete, if bizarre presentation. Outer Space's set saw the Cleveland duo mixing psychedelic bass drone with techno rhythms in front of a filtered projections of flowers and a styrofoam cup. Pete Swanson toed a similar line, catering his typically club-ready combo of apocalyptic noise and metronomic kick drum beats to a room full of people placidly seated. What resulted was a rhythmic, gripping set that was never constrained by the need to make people dance.
After seeing Swanson perform at venues like 285 Kent and MoMA PS1's Warm-Up, it was surprising to hear him, in his own words, “do whatever.” When pressed on what this was like, Swanson noted that he had just come back from a tour in Europe where he played a mix of clubs, art spaces, and even a burger shop in Rotterdam. “It was really upsetting people...There were people there to see the set, and then patrons of the burger shop. The patrons of the burger shop were more upset.”
It seems to be the case more and more these days that hardline, abstract experimental music is seeping into a more overground consciousness. In Swanson's case, the implementation of techno-esque beats has catapulted him into a broader circuit than the American noise scene he came up in, and Outer Space stands the chance of enjoying the same effect as the Detroit and Chicago dance influences are revealed in their music. But in an even bigger way, they type of sounds that have traditionally been confined to sweaty basements and DIY cassette labels over the course of the past decade and a half are being broken out by the types of minds that understand how to translate them for different tastes. 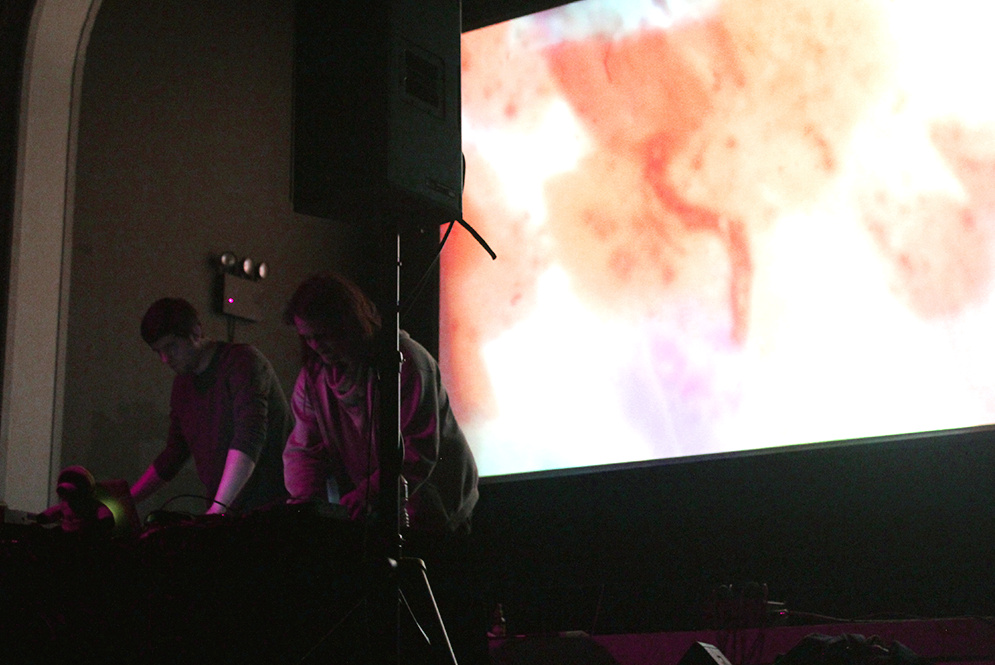 Outer Space. Andrew Veres (left) and John Elliott (right)
Take M. Geddes Gengras, one of the performers on the second night of Mixology festivities. With buddy and fellow Los Angeles experimenter Sun Araw, he traveled to Jamaica to produce a record for the famous reggae group, The Congos. The result, Icon Give Thank, is a widely lauded album that has received coverage from Pitchfork and the New York Times. The notoriety indirectly led to a reissue campaign of Gengras's work on vinyl by the label Umor Rex. He hit the nail on the head by describing his set at Roulette as “power ambient” meaning that it was “ambient, but emotionally very large.” Indeed, while the sounds presented were the product of a sole modular synthesizer, they had the drama and narrative of the finest minimalism of the '60s and the gnarliest prog rock of the '70s.
Both Gengras and fellow modular synthesist Ben Vida were the second of three acts on their respective nights at the festival, and it was exciting to see the contrast between the two. Vida utilized brevity as he presented a series of abstract and human sounds. “I like to move through them-- bring them to a threshold, and then on to the next thing.” This results in a set that feels like a presentation of vignettes and ideas. Gengras on the other hand presented something long form, with a degree of randomness. “It's like throwing dice or something. That's the fun part about that. I can do the same set 20 times and it will always sound different.” 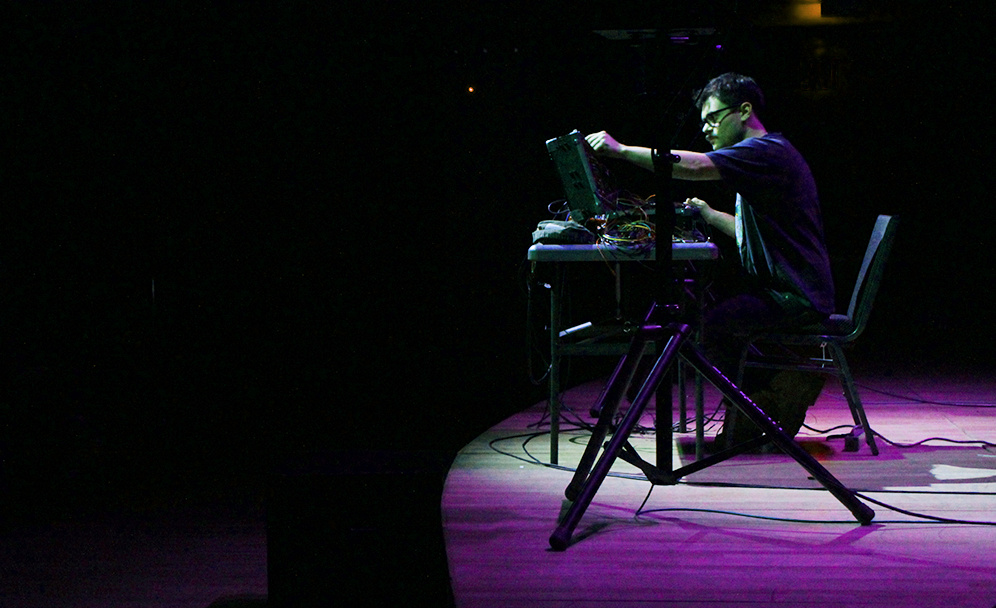 M. Geddes Gengras adjusting modular synthesizer
Gengras also noted that he designed his particular set for the space, the event itself, which is not a proclamation too far off from Swanson's ability to “do whatever” without needing to move an entire club. It was also a sentiment echoed in C. Lavender's set, in her presentation of a four-channel mix, which had a different sound at each of four speakers placed around the room. As someone “obsessed with how sound hits the full body,” she didn't know if “people would be sitting, if they'd be lying on the ground, walking around. I knew that each experience would be different for each listener.” In a way, C. Lavender's presentation affords a vast amount more agency for a listener-- with the ability to move around and experience different mixes-- than one gets at a conventional concert where you are either supposed to dance or sing along at just the right points.