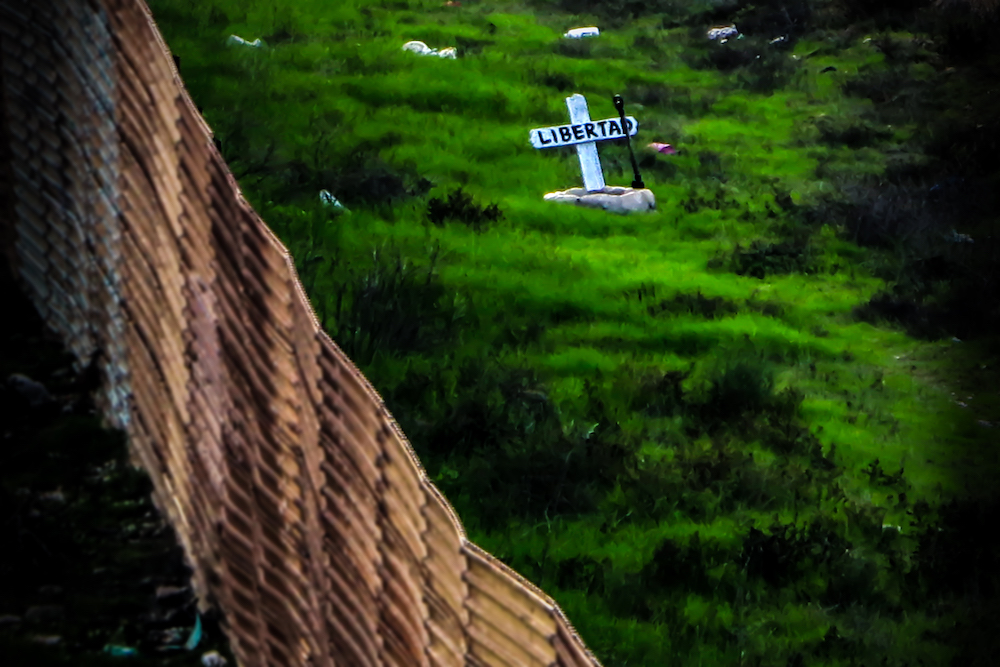 Images courtesy of the artists and MUJIN-TO Production

Mononymous Japanese artist and TV personality Ellie knows what it's like to be banned from the US, a plight at least 60,000 legal immigrants could face in the wake of an executive order Donald Trump signed late last month. The Tokyo-based artist and her collective Chim↑Pom installed a series of artworks along the Mexican–American border, needling the power structures and assumptions that accompany the conversation around immigration.

In December, the collective dug a grave-like hole under the wall already separating Tijuana neighborhood Colonia Libertad from the United States. Ellie crawled into the hole, now an installation called The Grounds, setting foot under US soil, but not on top of it. The action begged the question: did she break the law if she never set foot above the ground? Her footprints in the mud have been preserved on site for visitors to contemplate.

Nine days before Trump was sworn into office, Chim↑Pom and some Colonia Libertad locals hopped the border and held a funeral for freedom. The grassy plot of land between Mexico's wall and that of the United States is usually used as a garbage dump by locals, but the artists found it an appropriate place for their installation, appropriately entitled, LIBERTAD. Inscribed with the Spanish word for "liberty," the cross mimicks those hung along the border wall facing Tijuana Airport, memorials for those who died attempting to cross the border. "Since the cross is installed between the two new and old walls, in the border patrol’s location, the grave of LIBERTAD can be equally seen as holding the same meaning on the Mexican and American side," Chim↑Pom tells The Creators Project. 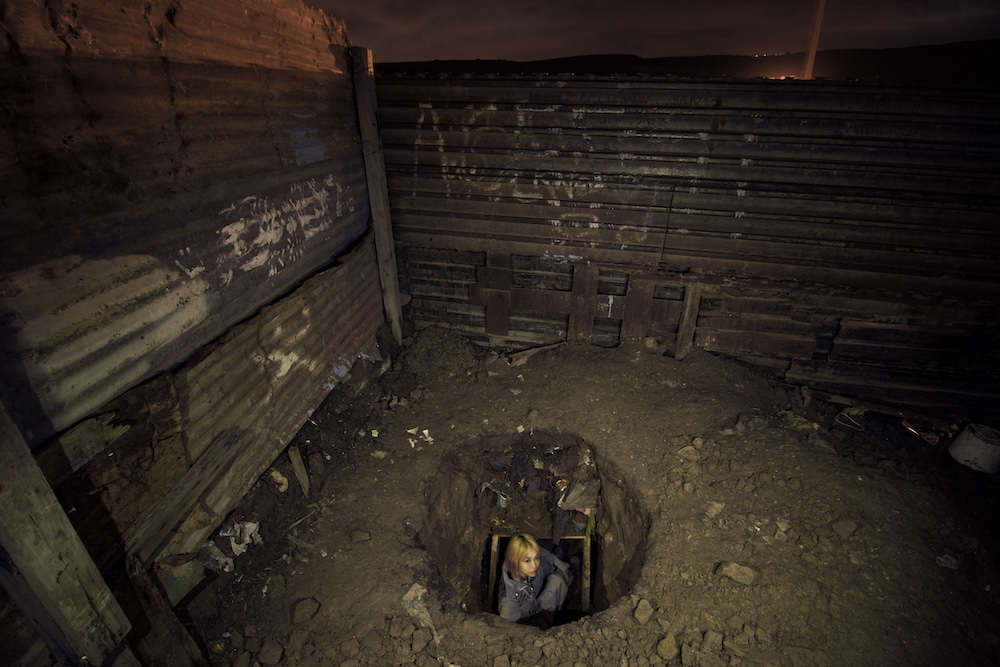 Both are visible from a DIY treehouse entitled U.S.A. Visiting Center, which Chim↑Pom installed in summer 2016. Its position in the backyard of a self-made house constructed against the border wall offers a sweeping view of both countries, including The Grounds and LIBERTAD. There, locals unable to get a visa to visit the US, usually children, can join Ellie in observing the forbidden landscape.

Ellie has been a victim of American bureaucracy for years. Her ban comes not from an executive order, but actually, standard policy. While traveling to Hawaii for a television shoot, Ellie was barred from entering the US because a member of her crew had ironically checked a box on a previous trip's customs paperwork identifying himself as a "terrorist." Several members of the crew were denied entry to the United States, including Ellie.

Every attempt to visit the country since has been rejected. America's borders with Mexico and Canada are the closest she can get, so she's had a lot of time to ponder the relationship between these narrow divides between nations. 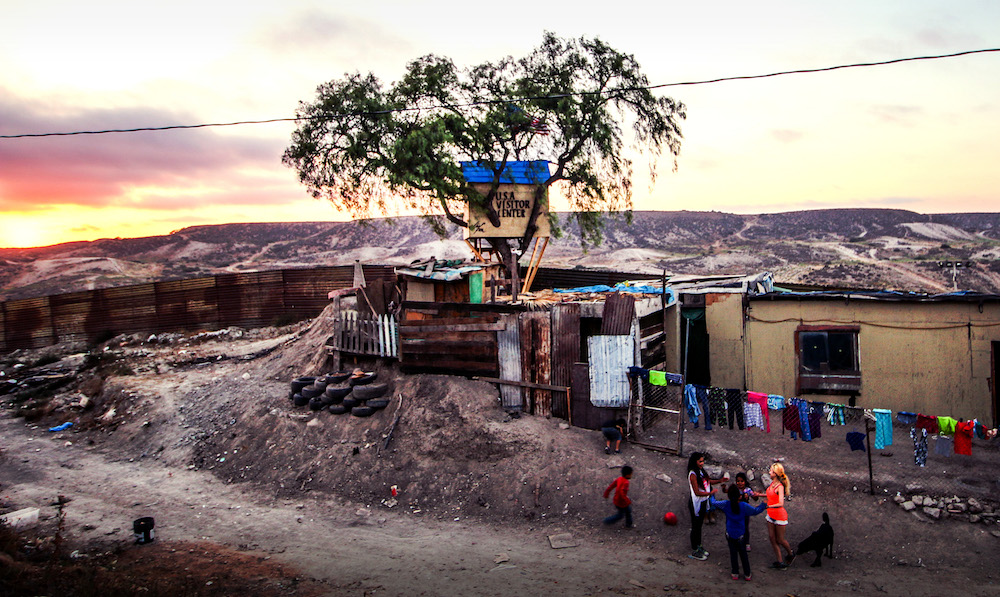 Chim↑Pom's first piece tackling US immigration was called COYOTE, named for the guides enlisted to illegally lead travelers across the border. The 2014 show at Friedman Benda Gallery consisted of a recorded Skype conversation between Ellie and a gallerist discussing these human traffickers. Ellie couldn't attend the show in person, since her visas kept getting rejected, so the visitor is trapped in the room with the discussion of coyotes, an overt reference to Joseph Beuys' 1974 performance I Like America and America Likes Me, in which Beuys locked himself in a room with a wild coyote for three days. Chim↑Pom's work Don't Follow the Wind, an art exhibition installed in the irradiated Fukushima exclusion zone, also deals with the nature of constructed borders.

Their current body of work has never been more pertinent, as President Trump's executive order to begin building an amorphous wall along the border and Muslim ban sparked protests all over the United States. Green card holders and uncounted refugees stranded overseas await an ongoing court battle to determine their legal standing. In the meantime, we discussed Trump and the nature of borders with the members of Chim↑Pom, who chose to answer in one voice. 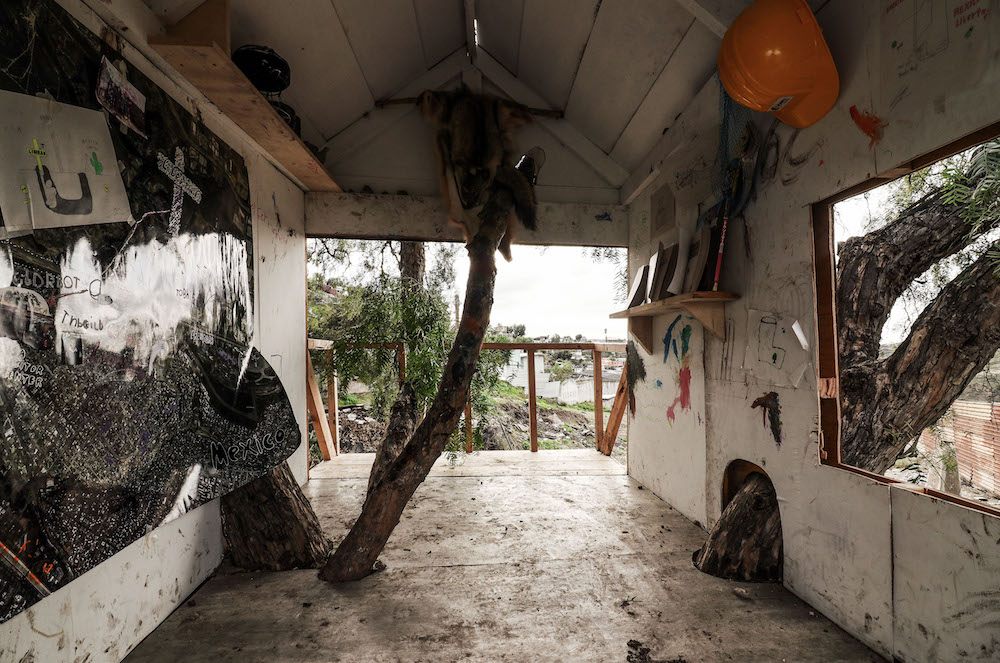 The Creators Project: What made you want to build a treehouse on the border?

Chim↑Pom: Upon considering what the United States is about, we thought it was important to think of it from the outside, since the motive was caused by Ellie being denied entry into the country. Just around that time, we had heard from a Mexican friend that around 40% of Mexicans can't enter the U.S. So we had the idea of building a U.S.A. Visitor Center before going to Mexico, for those people along the border with American land.

Our interest in Mexico had deepened with the piece COYOTE. But the most significant part was meeting that family that lives in that unique house and the tree that stands in their courtyard. That house reusing the border wall as part of their home's wall is probably the closest house to the U.S. in the world, beautifully overlapping their personal life with this matter between nations called the border. To top it off, the house has 13 cheerful children running around barefoot everyday. It was like Tom Sawyer. And many Mexicans, including them, cannot enter the U.S.––the same state as Ellie. When we saw that house's tree, we envisioned an art project overlapping with their life. That's the treehouse.

Tree houses have a history of being used to watch enemies. Another incident was we learned about is an art project that was part of inSITE, which installed a telescope right by the border for local residents to watch the U.S. side, but in fact was destroyed and deemed useless. So we wanted to make something useful for the children and community.

Some friends from L.A. visited the space, and local children play in the treehouse everyday. 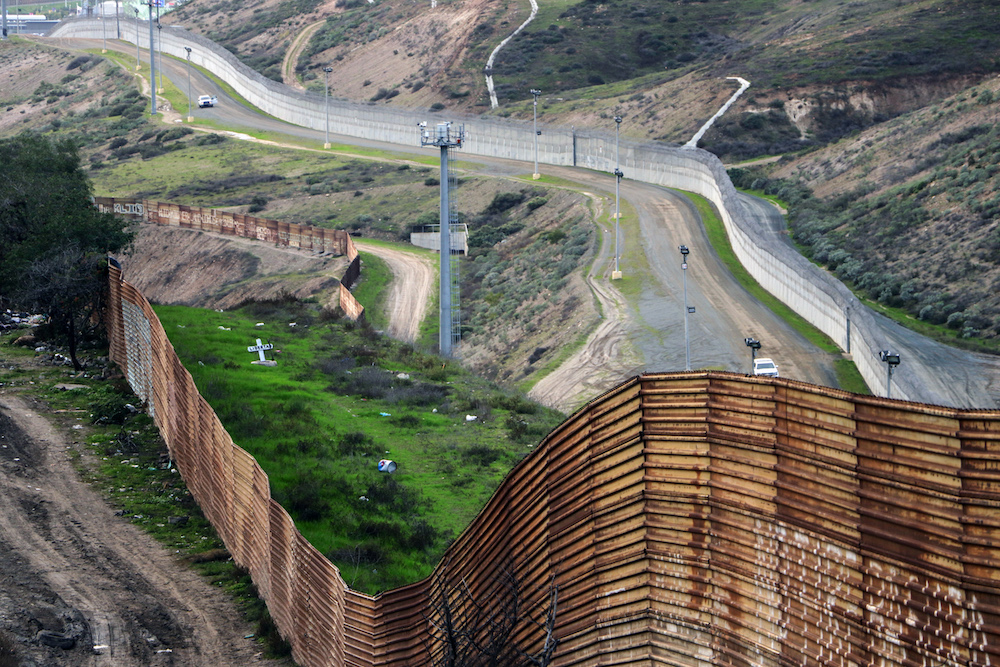 Were you worried about getting caught installing LIBERTAD and The Grounds?

Of course we were a bit worried. But observing the local residents' lives, we realized how different their realities of the border wall and the no man's land are compared to those who have never experienced that. They climb the wall everyday, picking up and throwing garbage, going on walks, or going to pick up a ball that went over it. It's natural for them since it's part of their living sphere/everyday life. The best way to go across the wall in making LIBERTAD was to collaborate with them and tap into the rhythm of their life.

Did making LIBERTAD and The Grounds give you any insight into the nature of borders?

There's the two, old and new wall, and a border patrol car was always parked in front of us in the no man's land, monitoring us when we were making the treehouse. On the old wall side in Mexico were many houses and towns with people living cheerfully. On the other hand we went to San Ysidro many times to research the new wall of the American side (with Ellie of course waiting in Mexico), but the area around the wall was a patrolling space, with only security cars. We wondered what the U.S. was so afraid of. Just by looking over at the U.S. with a telescope from the treehouse, the Mexican police came to question us, saying they were requested by the U.S. security forces to do so. To top it off, Trump is planning to build a huge wall. Even if you do such a thing, tunnels still exist, as well as reasons for the U.S. to be afraid of invasions and terrorism on the American side. Even though it's such a big country, it's very fearful. We thought it was like a small child. 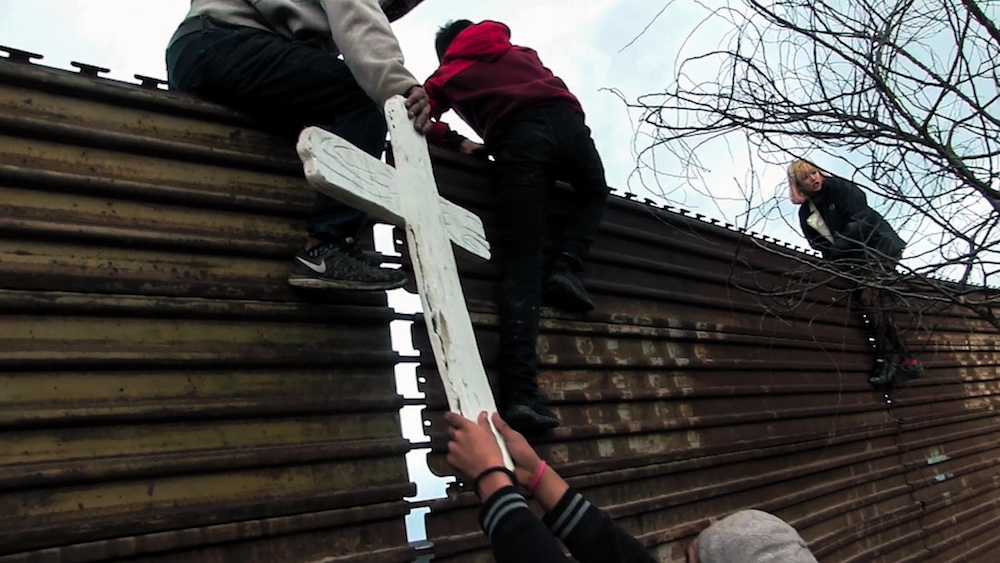 What do you hope people take away from this project?

The circumstances surrounding U.S. immigration right now are severe. Even then, children who have a strong desire to play are having fun inside the treehouse. Of course, many people become pessimistic in the worst situations, but humans also have the strength to turn them into playgrounds. If we forget our sense of humor, survival skills, and playfulness by drowning in a cycle of anger, hostility, retaliation, and fear, then that's exactly how art becomes defeated by reality.

Earlier this month Trump signed an executive order ordering the immediate construction of his wall. Has this changed how Chim↑Pom views U.S.A. Visiting Center, LIBERTAD, and The Grounds?

We knew it was coming, but it does feel like the circumstances of Ellie and the people of LIBERTAD became even closer and overlapping with the world's reality. 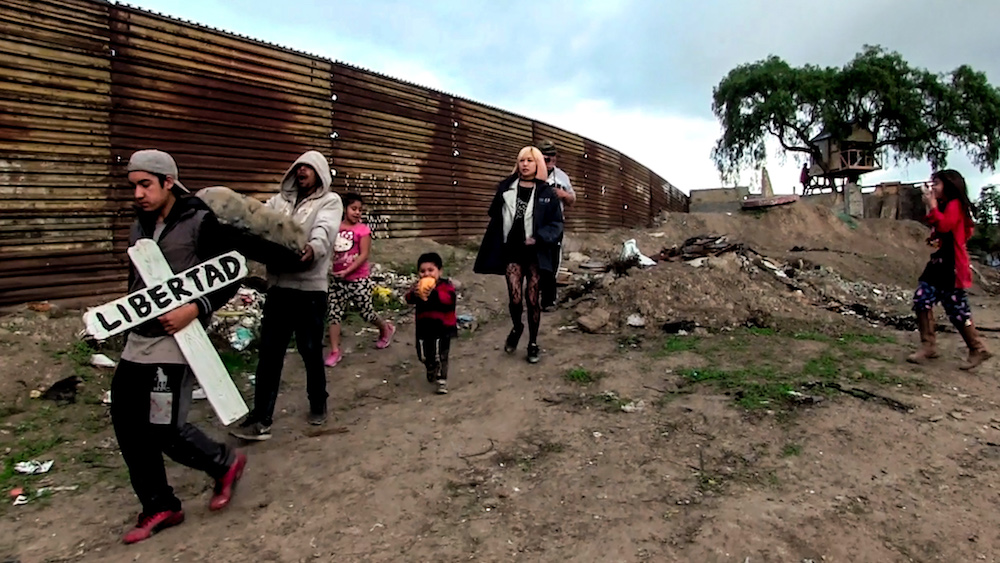 Why does a Japanese art collective feel the need to respond to a wall between the US and Mexico border? How do Trump's actions affect you?

Because Ellie has not been allowed into the U.S., Ellie became interested in the fact that she was specified a prohibited place. She felt a connection between Japanese people who can travel to most places, and the situation of the world. There's a place you cannot go—it's the same with evacuees from the exclusion zones in Fukushima and the Syrian refugees fleeing to Europe. Many individuals are at the mercy of international politics.

People in [Colonia] Libertad call the U.S. "the other side." We felt that abstract but universal sound resonating with us when thinking about the essence of a "wall." Beyond the specific unit of one nation, the current international community creates various "other sides." On the other hand, when we organized Don't Follow the Wind in Fukushima, we made it into an international exhibition. 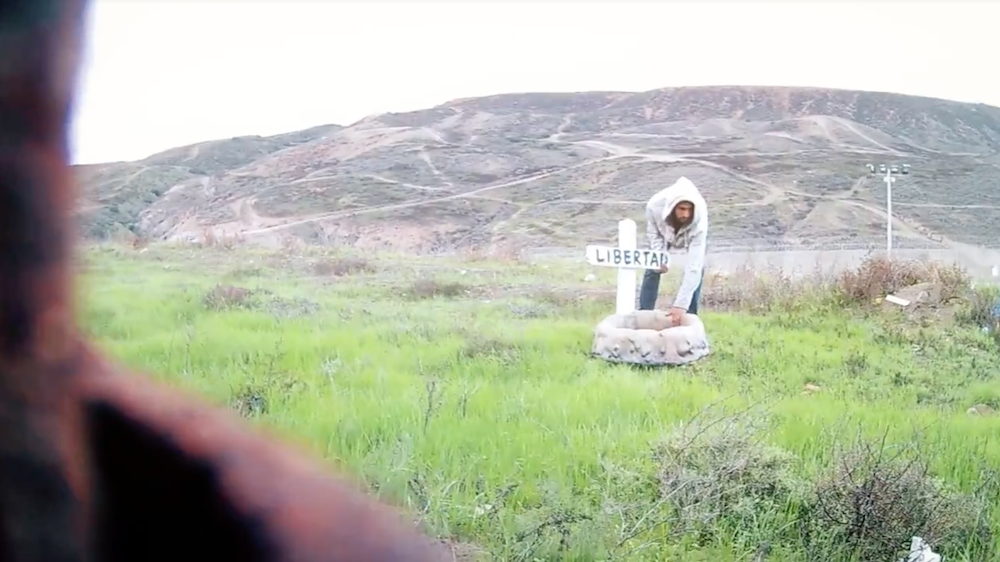 Artists Address Border Control: The Writing's on the Wall