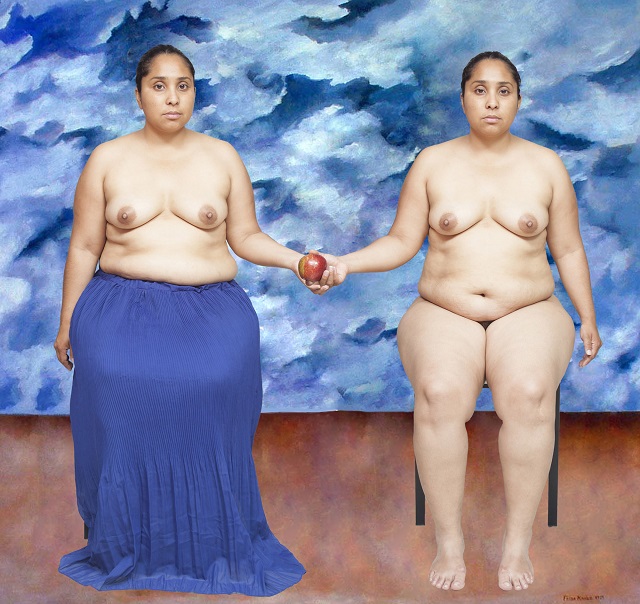 Interview translated from the original Spanish by Sarah Emory.

Eve, Frida Kahlo, and Venus are just a few of the many women Mexican photographer Carol Espíndola becomes in her latest, ongoing examination of female beauty. For the project, La Atlántida, o la utopía del cuerpo femenino (Atlantis, or the utopia of the female body), the photographer has collected representations of the feminine form throughout the history of art, from The Birth of Venus by Botticelli to Phryne before the Areopagus by Jean-Léon Gérôme, and inserted her own body into the scene. “The name comes from the search for the impossible place,” Espíndola tells The Creators Project, “Atlantis, as analogy of the search for the perfect feminine body.”

Instead of mimicking the poses of these leading ladies, however, Espíndola brings her own physical interpretations to the paintings. In her version of Phryne before the Areopagus (below), the photographer stands resolute, scrapping the dramatic shame of Phryne’s original posture. In The Birth of Venus, Espíndola brings her Venus down to her hands and knees, as she peers with trepidation over the edge of her shell. 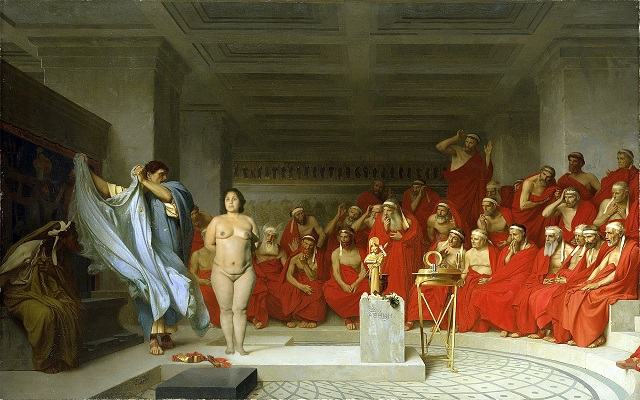 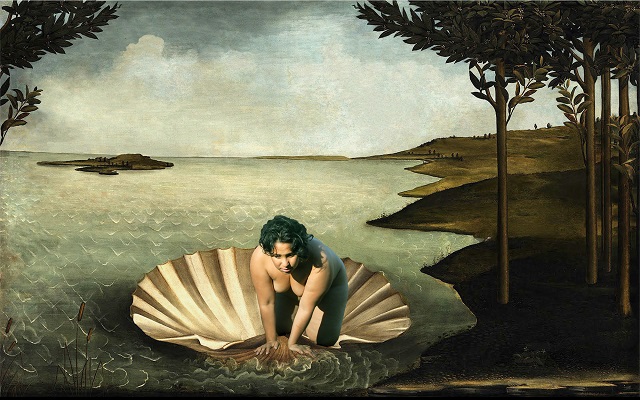 The photographer’s most ambitious undertaking in this series is Bosch’s famous and much re-appropriated The Garden of Earthly Delights. In her triptych, Espíndola removes all of the many painted subjects and grafts herself into the role of Eve—without, she adds, assuming the guilt of original sin. “[It] is one of my favorite paintings,” she explains, “and it unites many topics about women and beauty with which I work, such as the representation of Eve, women of color and their representation in the history of art, the self-portrait of the author ... to name a few.” 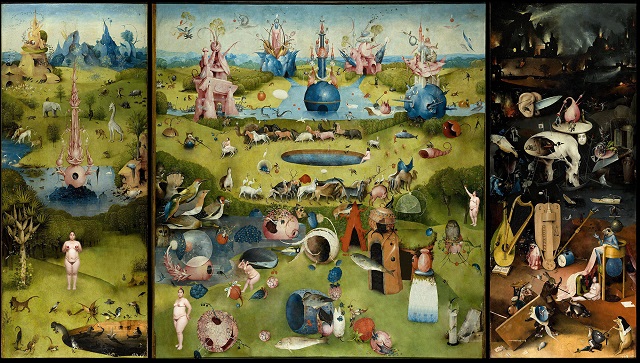 Espíndola’s artistic career began around the time of her twin daughters’ third birthday, when she won a local photography contest. The images she had submitted documented the daily moments and objects of her young family’s life. This triumph encouraged her to study the work of other artists, visit museums, and go to “all the exhibitions that [she] could.” She explains, “I understood in that moment that I had found my place: taking photographs.”

Her first project, Transición (Transition), originated from the photographer’s attempt to do “a portrait project about the transition from childhood to adolescence.” But while taking the portraits of three of her nieces and nephews and her twin daughters, the photographer was struck by a more complex concept for her work. “The body by itself began to seem truly important to me as a grand teller of stories,” she explains. 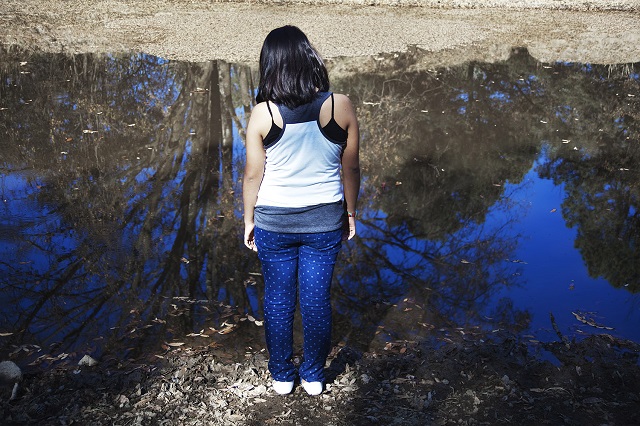 These images, as with many more in Espíndola’s oeuvre, are defined by the unique physicalities of the bare bodies. “For me nudity is a form of honesty,” says the photographer. “I don’t believe it to be vulnerability. The body is the medium with which we communicate with the world. It interests me to strip the sexual charge away from the naked body, so that we can take pause to simply contemplate it.”

Parallel themes run through the photographs of Espíndola’s next two endeavors, La Corteza de Venus (Venus’ Crust) and Entreacto (Intermission). One image in this first series shows the photographer and her husband standing on a grassy hill, looking out at the grey-blue horizon. Their backs are to the viewer, they are naked, and they are holding hands. 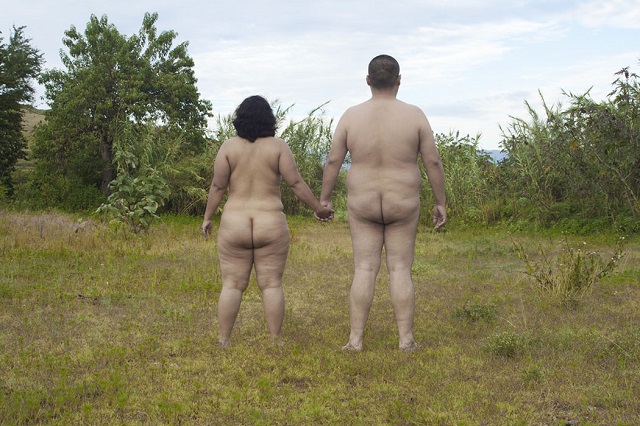 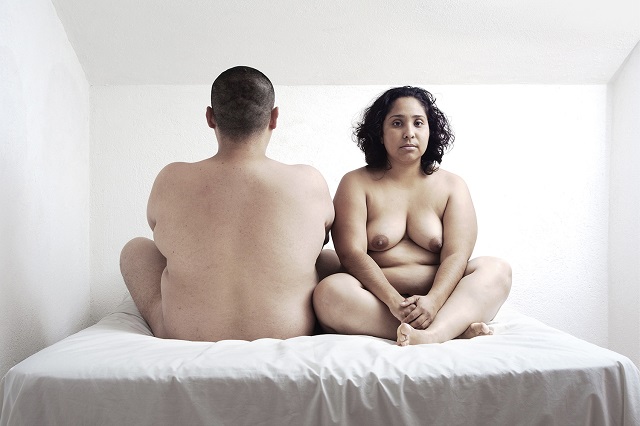 In another, Espíndola stands ankle deep in a river. Her face and upper body are sheathed in piece of clothing (what looks like a girl’s strapless dress), but she is naked from the waist down. This effect is inverted in another shot: Espíndola’s body is wrapped in a swath of turf, her eyes stare straight, emotionless, into the camera, one nipple peeks over the edge of fake grass. 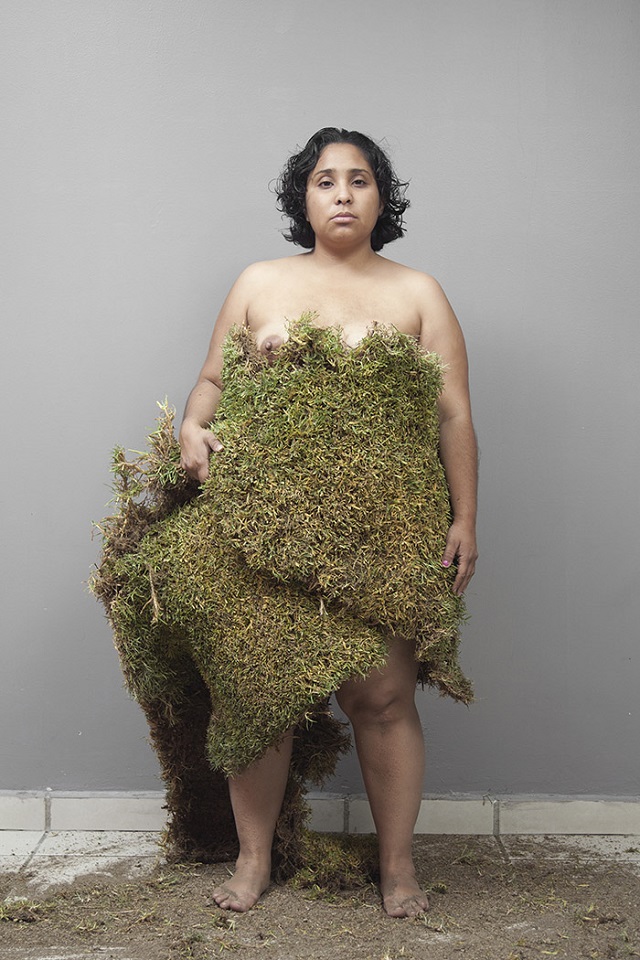 It is in this way that Espíndola uses her body to confront everyday crises of women in her country and beyond. “Just like in almost all of the world,” she explains, “in México, we are still met with machismo in daily life, with the social pressure to comply with the stereotype of imposed beauty; with the emotional crisis that many women confront when they stop being young and ‘stop being beautiful.’

"I use myself and my family to talk about this, so that women and men reflect upon the topic. For me, displaying the naked feminine body is a symbol of feminine empowerment.” 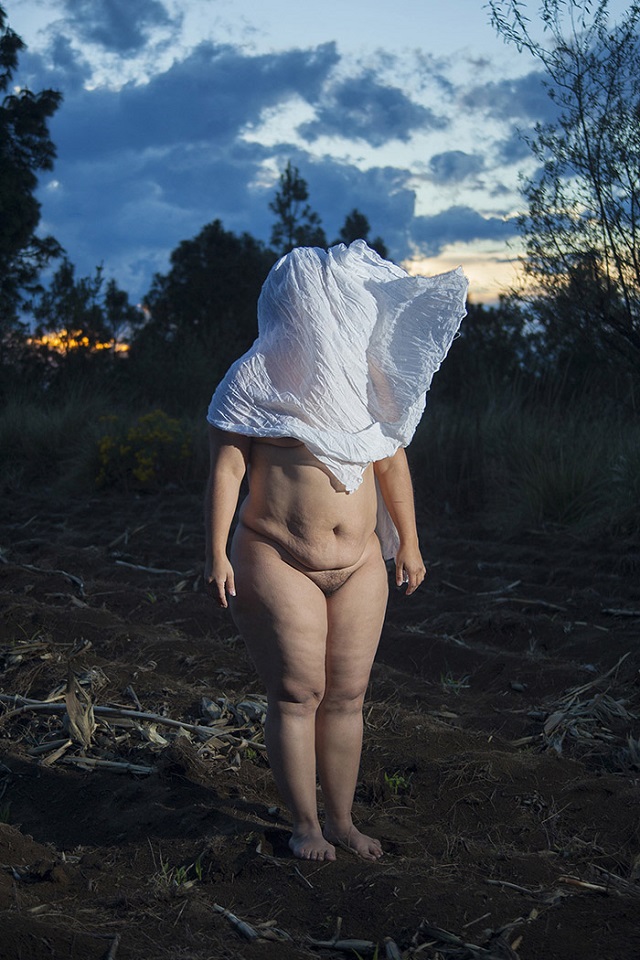 Espíndola often refers to her work as an act of faith. La fotografía como acto de fe. She says it means, “not stopping in the face of adversity.”

She continues, “[It means] to come from a small community where to be an artist is not the best option, economically speaking; to marry very young (18 years) and to not, due to that, stop looking for my personal development in order to concentrate on becoming only a ‘housewife’; to not be able to access formal studies in photography or in visual arts and to educate myself instead in a self-taught manner. Essentially, to go always against the wind, without losing faith.” 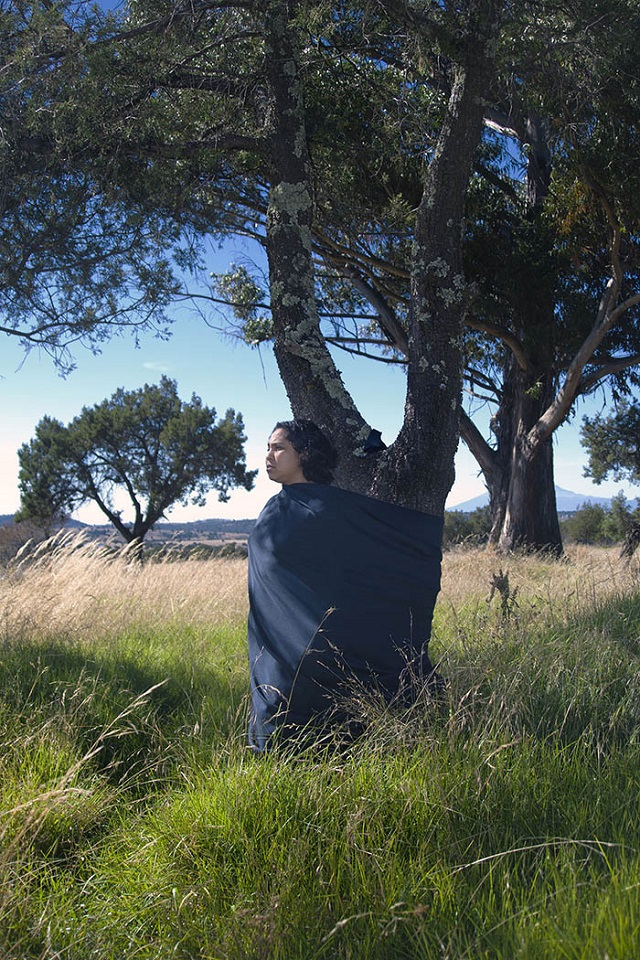 Find more of Carol Espíndola’s work on her website.