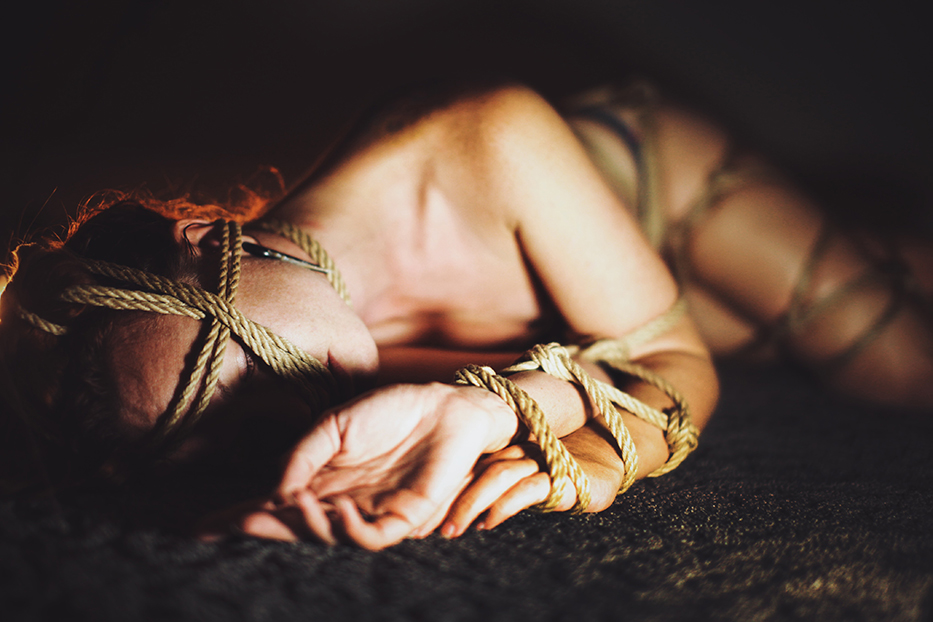 © Traci Matlock, courtesy of the artist

To the uninitiated, kinbaku might seem like the latest in pop-BDSM, but the tradition evolved over centuries before making it to the smutty, nipple-free crannies of social media. Historical antecedents include representations in shunga, Japanese erotica that once doubled as sex education for newlyweds, and Japan’s version of the Kama Sutra, Shijuhatte. Katsushika Hokusai’s Dream of a Fisherman’s Wife is an iconic reference to rope erotica—the ukiyo-e woodblock print depicts the ecstasy of a woman ravaged by octopuses whose tentacles intertwine and titillate her body in rope-like fashion. 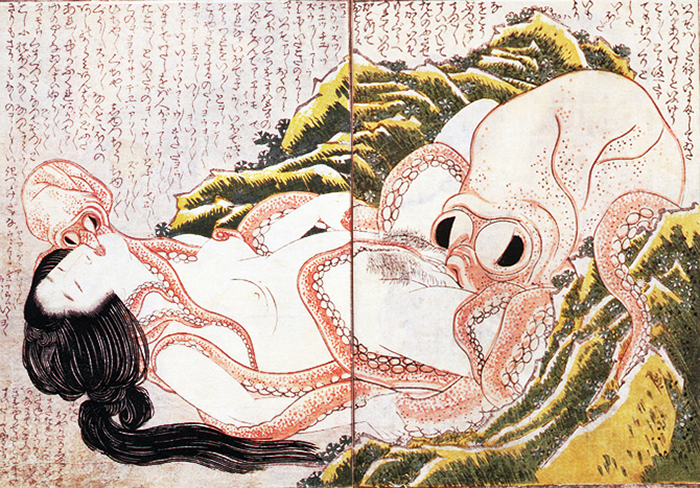 The Dream of the Fisherman’s Wife, 1814 © Katsushika Hokusai

Just as the tools of Western subjugation have become the subject of fantasy, rope has had a similar pattern of expression. The metal chains used to anchor damsels in distress in Western fairy tales find their correlate in the rope that subdues captives in Japanese folklore. In his definitive text on the subject, The Beauty of Kinbaku, author and teacher Master "K" explains that shibari, the general term for rope tying, has had myriad practical and decorative functions throughout Japan’s history, in Shinto spiritual offerings, Sumo wrestling, and traditional kimono. Its adoption into erotic practice is simply another application of rope—a tool inextricable to the culture itself.

During the feudal Edo era, the dominant samurai class used rope in combat and to restrain prisoners of war in a martial art called hojojutsu, a brutal practice that bears little resemblance to the kinbaku of today. At the time, from the 17th to the 19th centuries, official Tokugawa crime laws used knots to torture and extort confessions from captives and to display alleged criminals. Each public punishment specifically fit the crime, so the tie used to administer it created a legible, symbolic admonition for crowds of onlookers.

In the early 20th century, kabuki theater began adapting rope ties into its highly stylized performances, presenting the earliest instances of what is now recognized as kinbaku. The technique of hojojutsu was reimagined so that actors could recreate the moves safely on stage, and redesigned to be more boldly aestheticized, giving audiences a more prominent visual experience. 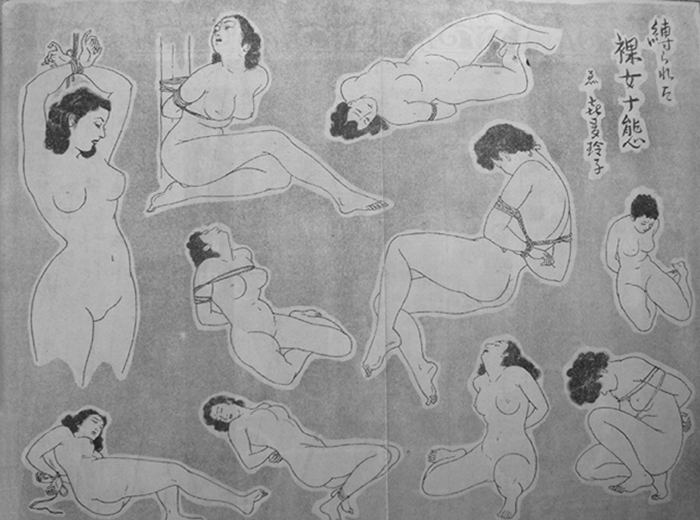 This seminal illustration, 10 Tied Women by Kita Reiko, appeared in Kitan Club in 1952. Circulation exploded following the issue it appeared in, influencing the magazine’s SM direction. Courtesy of Master "K"

After World War II, fetish magazines on both sides of the Pacific featured kinbaku in provocative illustrations, and later, photographs. Popular magazines like Kitan Club and Uramado were exchanged with mainstays from the American underground like Bizarre, beginning the cross pollination of two global fetish cultures, which has continued to this day.

To the untrained eye, kinbaku doesn’t look all that different from its roots in torture, but practitioners extol the virtues and pleasures of “sub space,” in which submissive partners can achieve a meditative state that is deeply therapeutic—finding, like so many BDSM enthusiasts, liberation in bondage. “When it’s done properly, kinbaku is not painful at all. It’s completely sensual,” Master "K" explains in an interview. "You can come out of a kinbaku session feeling every bit as relaxed as you do coming out of a good hot yoga practice,” he says, imparting how techniques stimulate erogenous zones, releasing endorphins and dopamine in the brain.

Despite providing one-on-one tutelage to a few select clients, Master "K" claims to have receded from the kinbaku scene in the face of its newfound popularity. Like much of the old guard, he is skeptical of the DIY ethos spilling over from the BDSM community post-Fifty Shades of Grey. Between YouTube copycats to alleged masters doling out workshops, he cautions that the technique demands rigorous study beyond hipster attention spans and weekend workshops. “In America, there’s a tendency to want to pay five dollars and expect that in two weeks you’re an expert. This is not something anybody can do without serious thought and learning,” he says, likening self-taught tiers to self-taught dentists. 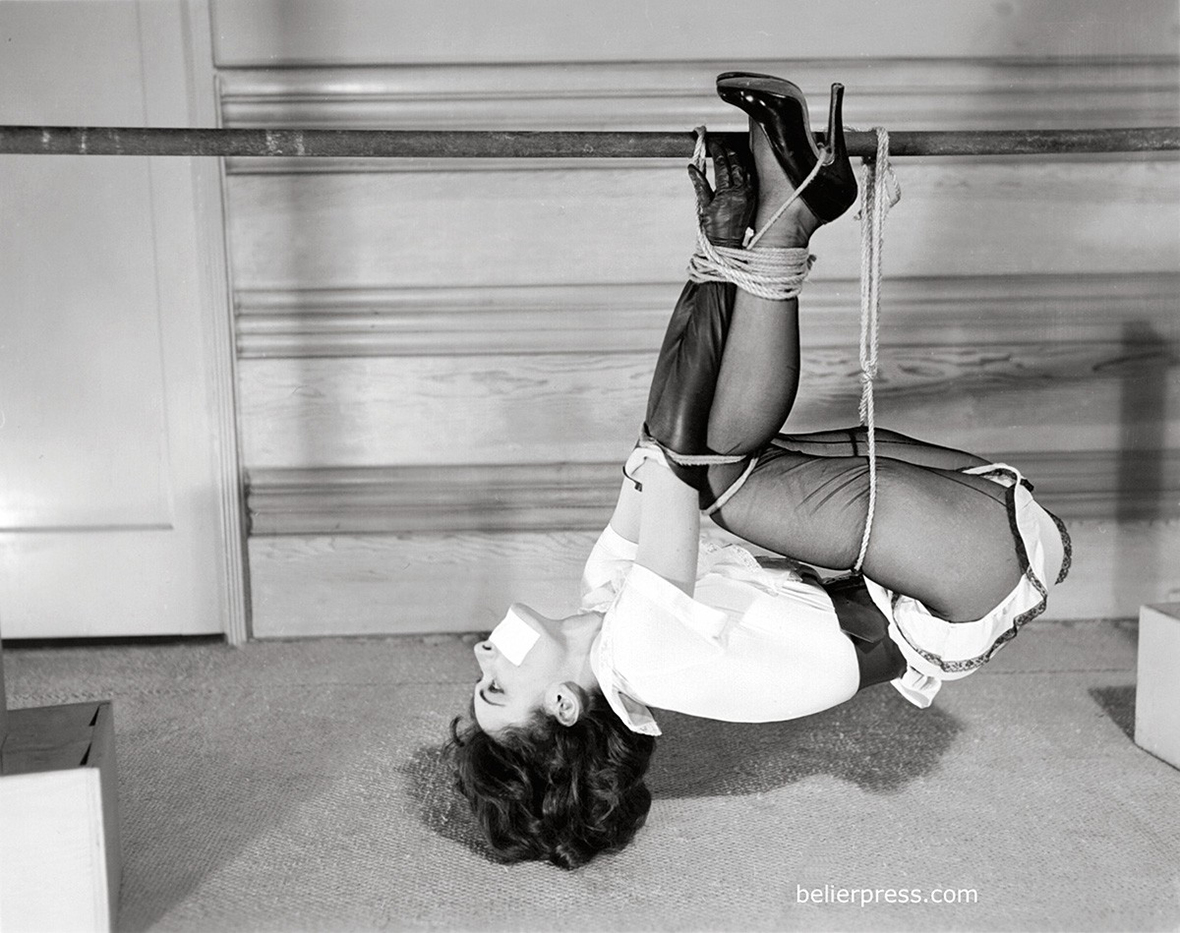 He emphasizes that kinbaku is a practice in which a tier “[takes] on a tremendous amount of responsibility for [a] partner,” and that “kinbaku, at its most important, is about communication, empathy, and real understanding before any technique is applied.” Beyond knowing basic anatomy and the location of nerve centers, that means checking in with someone on a physical and psychological level, such as asking if a submissive is on medication or if they have significant past injuries. Then, and more importantly, a tier must know how to adjust techniques to address particular needs. “The dirty little secret,” he says, both here and in Japan, is that kinbaku models get hurt.

Master K says he’s delighted that kinbaku is coming out of the shadows, “and being appreciated, hopefully for the right reasons ... It is very empowering and is [finally] being seen for that instead of misogynistic junk.”

To learn more about kinbaku history, influential masters, and art appearances, grab yourself a copy of The Beauty of Kinbaku by Master "K".